Welcome to Open Play on Indian Ridge’s premier pickleball courts!  Players of all levels are encouraged to join during this time. Guests are not allowed during Open Play times. Courts are assigned by ability level as described below. This may be adjusted depending on who shows up each day.

Courts # 2: Advanced Play: players with ratings (or self-rating) of 3.5 or higher.

Court #3-5: Intermediate play: players with a rating (or self-rating) of 2.5 or higher 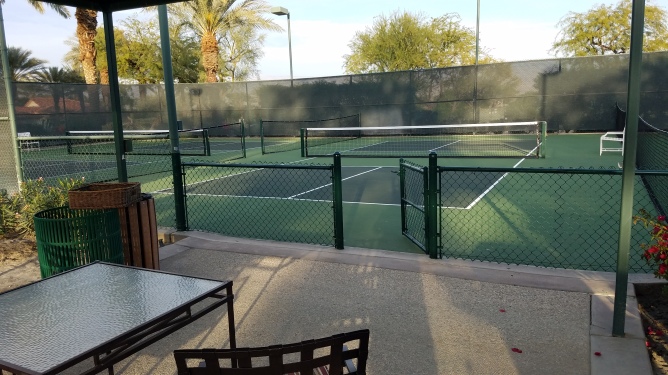 If 1 or 2 players are waiting to play, and play on a court ends, the winners on that court split and stay and the losers are replaced by the waiting players, with these exceptions:

If 4 or more players are waiting, and play on a court ends, all players on that court are replaced by the first 4 players waiting.

Here at Indian Ridge, we consider beginners to have a level below 2.0. Intermediate players are 2.0 to 3.0. Advanced players are those with a rating of 3.5 and above.

If you are not sure of your skill level, you can peruse the IFP Rating Descriptions for self-rating below and get a sense of where you fit.  But don’t worry,  if you’re a beginning-level player, we have experienced member-players (we call them “Hosts”) at each session to introduce you to the game and help you fit into matches. Please call the Fitness Center desk (760-772-4432) and let them know when you would like to come for a beginner’s mini-clinic, so you can be sure a “host” will be there to offer help (a minimum of three players and a maximum of eight players is preferred, so the desk may suggest other days when you will be better served.

The IFP Rating System has been created to help describe differences in the various skill levels.
Rating Rating Description

1.0 •New and have only minimal knowledge of the game and the rules.

1.5 •Limited to some rallies.
•Learning how to serve.
•Developing a forehand.
•Fails to return easy balls frequently and occasionally misses the ball entirely.
•Played a few games and is learning the court lines, scoring, and some basic rules of the game.

2.0 •Sustains a short rally with players of equal ability.
•Demonstrating the basic shot strokes – forehand, backhand, volley, overhead and the serve, but has obvious weaknesses in most strokes.
•Familiar with court positioning in doubles play.

2.5 •Makes longer lasting slow-paced rallies.
•Makes most easy volleys and uses some backhands, but needs more work on developing shot strokes.
•Beginning to approach the non-volley zone to hit volleys.
•Aware of the “soft game.”
•Knowledge of the rules has improved.
•Court coverage is weak but improving.

3.0 •More consistent on the serve and service return and when returning medium-paced balls.
•Demonstrates improved skills with all the basic shot strokes and shot placement but lacks control when trying for direction, depth, or power on their shots.
•Beginning to attempt lobs and dinks with little success and doesn’t fully understand when and why they should be used.

3.5 •Demonstrates improved stroke dependability with directional control on most medium-paced balls and some faster-paced balls.
•Demonstrates improved control when trying for direction, depth and power on their shots.
•Needs to develop variety with their shots.
•Exhibits some aggressive net play.
•Beginning to anticipate opponent’s shots.
•Learning about the importance of strategy and teamwork in doubles.

4.0 •Consistent and dependable strokes, including directional control and depth on both forehand and backhand shots.
•Reliable serves, lobs, overheads, approach shots and volleys and can use spin shots with some success.
•Occasionally can force errors when serving.
•Rallies may be lost due to impatience.
•Uses the dink shot and drop shots to slow down or change the pace of the game.
•Demonstrates 3rd shot strategies – drop shots, lobs, and fast-paced ground strokes.
•Aggressive net play and teamwork in doubles is evident.
•Fully understands the rules of the game and can play by them.

4.5 •Beginning to master the use of power and spin, can successfully execute all shots, can control the depth of their shots, and can handle pace.
•Beginning to master the dink shots and drop shots and their importance to the game.
•Beginning to master 3rd shot choices.
•Displays sound footwork and moves well enough to get to the non-volley zone whenever required.
•Understands strategy and can adjust style of play and game plan according to the opponent’s strengths and weaknesses and court position.
•Serves with power and accuracy and can also vary the speed and spin of the serve.
•Understands the importance of “keeping the ball in play” and the effect of making errors.
•Making good choices in shot selection.
•Anticipates the opponent’s shots resulting in good court positioning.

5.0 •Mastered all the skills – all shot types, touch, spin, serves, with control and can use them as weapons.
•Excellent shot anticipation, extremely accurate shot placement and regularly hit winning shots.
•Forces opponents into making errors by “keeping the ball in play.”
•Mastered the dink and drop shots.
•Mastered the 3rd shot choices and strategies.
•Uses soft shots, dinks and lobs to set up offensive situations.
•Mastered pickleball strategies and can vary strategies and styles of play in competitive or tournament matches.
•Dependable in stressful situations as in tournament match play.
•Athletic ability, quickness, agility, and raw athleticism are also qualities that are sometimes what separates the top players from those near the top.